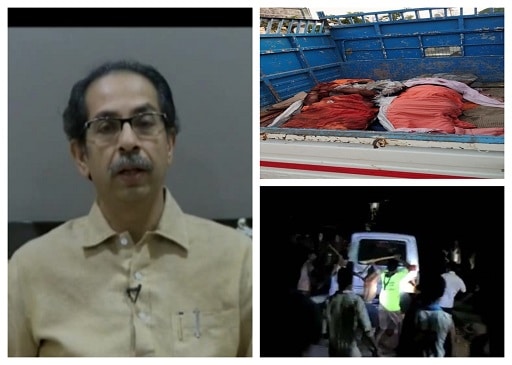 Maharashtra Governor Bhagat Singh Koshyari spoke to Akhil Bhartiya Akhara Parishad President Mahant Narendra Giri over phone in the face of outrage over the brutal killing of two sadhus of Juna Akhara and his driver in Palghar district of Maharashtra. is. He expressed condolences on the killing of the sadhus and assured them of action.

Mahant Narendra Giri has demanded from Governor Bhagat Singh Koshyari that he should write a written reply to the Maharashtra CM Uddhav Thackeray asking the entire action taken by the government so far. Along with this, he has demanded the dismissal of the guilty police personnel for killing in the presence of police personnel.

This is beyond inhuman.. More than 100 people have been arrested for allegedly killing 3 sadhus in Palghar (Maharashtra).. Such an shameful heart wrenching and disgraceful act by nonsense creatures. @MumbaiPolice @CPMumbaiPolice @Palghar_Police @OfficeofUT @Dev_Fadnavis #Palghar pic.twitter.com/tY54pQq1ag

In our country, most of the information about the saintly saints is found on the day of Kumbh Mela or any special festival. In such a situation, Juna Arena has once again come into the discussion in India.

Two sadhus of Juna Akhara and one of their drivers were beaten to death by a mob in Palghar, Maharashtra with sticks and iron rods. Politics is hot all over the country on this matter. Yogi Adityanath also demanded Uddhav Thackeray to take strict action in this regard.

Meanwhile, there is tremendous resentment in the Hindu society, not just the saints, for the killing of the sages. A high-level inquiry into the matter has been called for at the meeting of all the 13 Akhada and strict action is taken against the culprits.

The akharas have also warned that, if the Maharashtra government does not take strict action against all the culprits by conducting an impartial inquiry into the matter, the akhadas will decide further strategies in the matter.

At the same time, Uddhav Thackeray immediately took cognizance of the case and 110 people were taken into custody.

We condemned lynching of sadhus in Maharastra palghar, We appeal to government that strict legal action will taken against murderers.