Akshay Kumar Family – Akshay Kumar is a very famous Bollywood actor. He is one of the talented actors who won several national film fare awards. He is the highest-paid actor in India. Today we are going to uncover the Akshay Kumar Family. So Just, Keep reading the full article.

Akshay Kumar born in Amritsar and later on move to Delhi Chandani Chowk, New Delhi.  After struggling as a Cook and martial art expert. He move back to Mumbai and started working as a Model and now Akshay is a very famous Actor in India as well known highest-earning actor in the list of Forbes. Due to Akshay down to earth nature, he always ready to help anyone and also doing lots of social-based work from time to time.

Below is the detail of Akshay Kumar Family

Akshay’s father is Army Men and residing in Amritsar. Somehow he left the army and later joined UNICEF as an accountant. Akshay Kumar Father was very much supportive and serious about Akshay’s career. Due to this, he sends Akshay learning Martial art Techniques from Thailand and suggesting him to do modeling as recommend by Akshay father friend. Later he suffered from cancer and died in 2000. Due to this, Akshay Kumar so upset sometimes. Afterward, he opens a production house and named on his father “Hari Om Entertainment”.  Also, he is performing charity for police professionals.

Akshay Kumar Mother Aruna Bhatia is very near to Akshay Kumar. Akshay Kumar is very caring for his mother. Aruna Bhatia is a partner in Hari Om Production. In which, she produces movies for Akshay. Akshay always schedules a time for his mother, whenever he was free from his movie shootings. Akshay Kumar recently spotted in London street with his mother. His Mother gets knee surgery recently and Akshay taking care of his mother. He shared a video on social media with a beautiful message that “Juggled shoot to spend a few days with mom in London. No matter how busy you are with life and growing up, don’t forget they are also growing old…so spend time with them while you can.”

Akshay is very famous in India as well as abroad. But his sister Alka Bhatia is very far away from Bollywood limelight. Alka Bhatia is the only one sister and she married with builder namely Surendra Hiranandani. Surendra is divorced and this his 2nd marriage. They both get married in 2012. Akshay has too much love and affection for his sister. Alka Bhatia is away from B- Town due to not every person knows him as Akshay is famous. Alka comes in new when she married after a 15-year long relationship with his boyfriend Surendra Hiranandani. Due to this, Akshay Kumar is too upset and angry with her. But later on, he approves her relationship.

Twinkle Khanna is the daughter of Rajesh Khanna and a very famous former Bollywood actress. She also produces lots of films. She acted in more than 15 films in Bollywood. Due to some personal reasons, she left the Bollywood and starting her career in Interior Designing and open a company namely White Window. She is endorsing top brands of cosmetics and also a brand ambassador of L” Oreal. In her film career, she has done lots of superhit films. After she married Actor Akshay Kumar, she left the film industry to focus on her married life and make her career in Interior designing and Producing films. 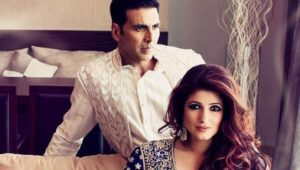 Rajesh Khanna is an actor, producer, and politician with his dad in law. He’s also known as “the first superstar, he’s considered one of Hindi cinema’s most important performers. He has worked for a total of 180 movies. He died in his bungalow in Mumbai on July 18, 2012.

Dimple Chunnibhai Kapadia, his mother in law, was born on June 8, 1957. She produced her film debut at the age of 16. In 1973 she married Rajesh Khanna and Twinkle Khanna & Rinke Khanna was born to the couple. Unfortunately, in April 1982, the couple was segregated and she took the children’s custody. She said in an interview in 1985 that “the day I and Rajesh got married, life and happiness in our house came to an end.” But the pair buried their bitter emotions in 2010, and together they did their election campaign.

Twinkle Khanna stopped working for the movies after the marriage and devoted her life to family and kids. The couple is blessed with a son born on Sept. 15, 2002, Aarav Bhatia and a daughter born on Sept. 25, 2012, Nitara Khanna Bhatia.

This is the article, in which we give the detail of Akshay Kumar Family.