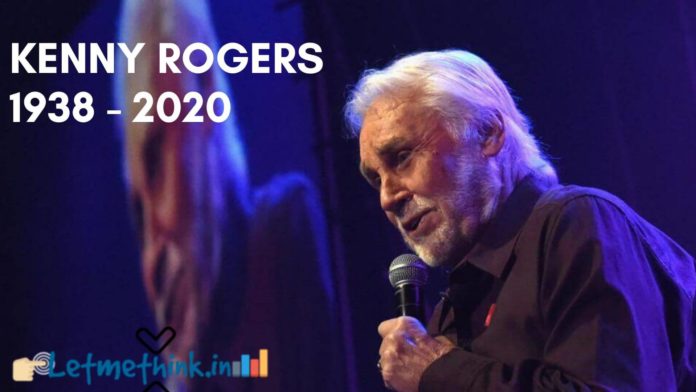 Kenny Rogers was an American pop singer who was very popular not only in the US but in the music industry, As he died on 20 March 2020 in his home town. He was a Song Writer, Actor, Record Producer and Entrepreneur by profession and has also won the Country Music Hall of Fame title in 2013.

There are many ups and downs in his life as opposed to the one who started his career in the 1950s, and by attaining these ups and downs, he touched the heights of success that it is not easy for everyone.

As per the statement of his family, “The family will organized a small private service at this time out of concern for the national COVID-19 emergency.

In 1976, Kenny Rodgers received that success, when he presented his first solo career album. And his first single line in the top 20 hits. His successful single chart is “Love Lifted Me”.

Kenny Rodgers was a very good person who entertained and won the hearts of all people with his simple life.

He is considered to be very good at singing as well as acting and he showed his performance in movies and TV serials too. The Gambler, CNBC Mystery Movie and Six Pack is the some best movies and tv serials are perform by Kenny Rodgers.

He has been rewarded with numerous awards such as the Grammy Awards AMAs CMSs and the Life Achievement Award in 2003.

The death of Kenny Rodgers has caused a piece of shocking news to his fans and loved ones and started to trend on social media and Fans of Kenny Rodgers remembered him and shared the memory about him on Twitter and Facebook.

Lionel Richie Mourns Death of Kenny Rogers: ‘I Lost One of My Closest Friends’ https://t.co/K1w0fUOwuH

Rest in peace Kenny Rogers. We will never forget you. pic.twitter.com/V9rEDx8Cqf

For More Information and updates about Entertainment, Technology and more. Just Follow Letmethink.in