The trailer of Black Widow, released today by Marvel Entertainment on 14 January 2020, has a lot of excitement and surprises in the movie. The trailer is full of adventure and suspense.

Most of you know the story of Blackwidow, many people may have read about it in the comics, but even if you don’t know, I tell you that Blackwidow is a fictional character created by Marvels and this character especially But young generation likes are very popular among children.

This character was first published in “Tales of Suspense”  (1979).  The story is of a Russian villain Gopi who is a Russian spy and is very well-liked by the people as a villain in the Iron Man movie. Later, he moves to the US and works there in the spy agency. Later she joins the Avengers.

Black Widow Trailer in Trending topic over on Youtube

Shortly after the release of the trailer, it got the news in Millions and people have also liked this trailer a lot, so far, almost 50,000 people have liked on this trailer. It is expected that this movie will earn well after release.

In the trailer, you can fee the goosebumps. Awesome direction and cinematography which is excellent. This trailer reminded me of Mission Impossible Trailer and which was similarly awe-inspiring. I am very excited to see this movie in the theater. The movie going to hit theaters in May 2020. The audience is very eagerly waiting for this movie. And we hope that this movie will take a good response from viewers. 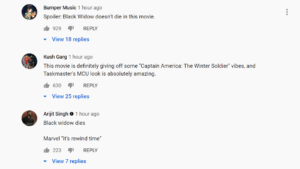